From 21 to 25 January 2022, a month before Russia invaded Ukraine, Two Six Technologies deployed a short survey asking Ukrainians to share their thoughts on Russia’s activity on its borders. We advertised our survey in Ukrainian and Russian, ultimately providing over 10,000 people in Ukraine the ability to share their perspectives and story. We have performed similar analyses for counterterrorism, countertrafficking, public health, and other difficult problems of global concern. However, in this case, our results uniquely depicted the scale and complexity of the conflict as it unfolded.

Much like anything on a global scale, Russia’s activities seemed slow, then immediate. Similarly, we followed the information environment (IE)—digital conversations across social media and the web—and observed the swift decline of Russian-Ukrainian relations. Keeping with the accelerated pace of events, our survey effort—from development to analysis and distribution—took two weeks and a total budget of less than $10,000. Our findings were shared widely, providing clients and the community with valuable decision-making data at a fraction of the cost and time of traditional methods. In crisis, we lack the luxury of waiting.

We decided to share these findings more widely through this medium to demonstrate what can be done when combining technology and tradecraft and baseline future social science studies, which we hope will make a difference in this space.

The findings presented below reflect Ukrainian perceptions as of late January 2022.

From 21 to 25 January 2022, we ran a remote survey in Ukraine to gather impressions of NATO, Russian military movements, and crisis response to determine if opinions differed between regions and ethnic groups. We segmented the online Ukrainian population into the eastern border (Chernihiv, Donetsk, Kharkiv, Luhansk, and Sumy oblasts), the capital (Kyiv oblast and city), and the rest of the country. These regional groups were further segmented based on gender and age groups using Ukraine’s census data from 2020. The budget included costs to advertise content and incentivize survey participation. Advertisements were allocated evenly across the three regions of interest and weighted for representativeness across each region’s gender and age groups. Using the above segmentation plan, we advertised to Ukrainians 18 years of age or older. To encourage participation and completion, we incentivized the study using a lottery model, where 100 respondents who completed the survey were selected at random to receive 150 UAH in mobile airtime credit. Our advertisements, delivered in Russian and Ukrainian, reached over 940,000 Ukrainians. Of this number, 34,131 engaged with the ad, 33,216 initiated the survey, and 10,316 completed most questions (8,482 completed all).

The data generated represented all oblasts (Figure 1). Most participants were from Kyiv (Region 2), followed by Kharkiv and Donetsk (i.e., dark blue oblasts in Region 1). Eighty-seven percent (87%) of participants identified as ethnic Ukrainian; 10% as ethnic Russian. 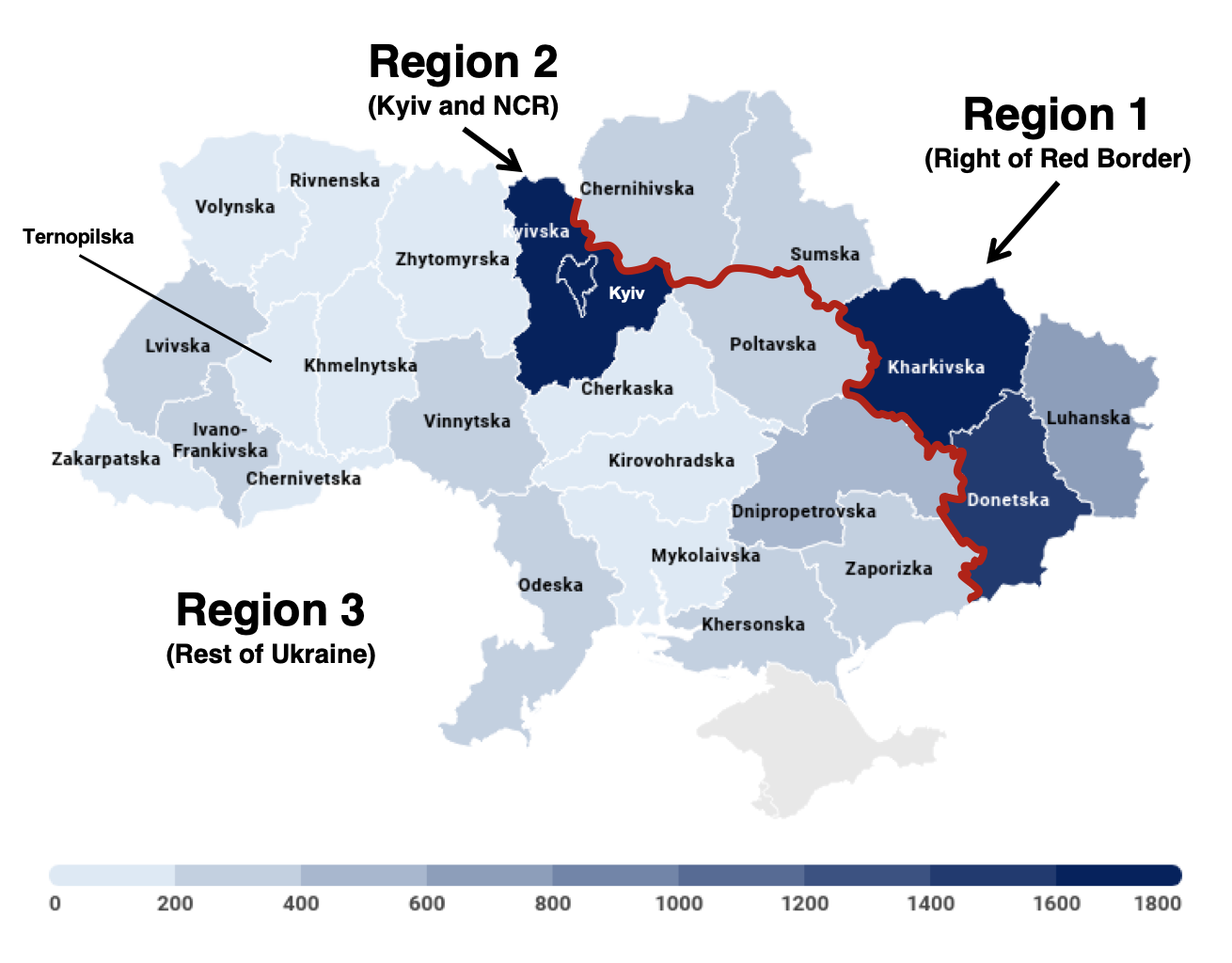 Confidence in Ukraine’s Government and NATO

In January 2022, confidence in the Ukrainian government was low, with 59% of respondents selecting Not Confident or Not At All Confident and only 21% selecting Confident or Very Confident. Given Russia’s poor military performance and Ukraine’s superiority in the IE—dominated by stories of resolve, soundbites, and myth—data from the IE shows that these perceptions have changed since the invasion began on 24 February (Figure 2).

[The story of a Ukrainian woman giving seeds to Russian soldiers so sunflowers could grow from their corpses gained traction in February following the invasion; trends such as sunflower images in social media profiles and sunflower-themed art and fundraisers followed.]

Figure 3. Perceptions of NATO effectiveness: ethnic Russians vs. all other ethnicities

While Ukraine has sought membership since 2008, it has been blocked in some cases due to its internal politics; though speculation exists that Ukraine’s membership would sour Moscow’s relations with all member countries. In light of President Zelenskyy’s statement that Ukraine will not seek NATO membership, a follow-up survey may determine broader Ukrainian opinions on NATO’s effectiveness or desire for a military support network.

When asked which statements were true regarding NATO’s regional military exercises, respondents indicated the exercises were critical to maintaining Ukrainian sovereignty and deterring conflict (3,216 and 3,118, respectively). Region 1 respondents were more likely to view NATO exercises negatively than other regions, and ethnic Russian participants were more likely than other ethnic groups to view NATO exercises as harmful and escalatory (Figure 5).

Pre-conflict, 72% of respondents believed Russia’s military activities posed a significant threat to Ukraine’s sovereignty or were preparations to invade Ukraine. Participants from Region 1 were less likely to answer this question while Region 2 respondents were more likely to view Russia’s activity as threatening or preparation for an offensive. This trend was also true for Russian and ethnic Ukrainian respondents, respectively (Figure 6).

We followed this question with whether sanctions should be imposed on Russia, should Moscow escalate hostilities; 64% of respondents overall supported sanctions; 26.4% did not know or declined to answer. Region 1 and ethnic Russian participants were more likely to respond with no or a non-response option compared to other regions and ethnicities (Figure 7).

Despite Ukraine’s concerns leading up to the conflict, the people have demonstrated significant resolve in countering a formidable global power, both in military capability and information operations, which has paid dividends to its presence internationally. Of interest, and previously identified throughout this post, is how perceptions have changed since the antebellum survey. We have noted specific topics to investigate, like NATO’s effectiveness and local government efficacy—the former of significant interest as European security may have greater need of it.